In early September, Panini America will reintroduce an old friend to football collectors with the release of 2015 Donruss Football. The first standalone Donruss-branded NFL product since 2002 will deliver both hobby and retail versions steeped in long-adored brand staples such as Rated Rookies, Classics, Dominators, Gridiron Kings, Passing the Torch Autographs and more.

Bolstered by the regal return of Diamond Kings Baseball as a standalone brand earlier this year after more than a decade away, Panini America officials recently announced that the art-card renaissance is crossing over to the NFL, too. In early October, the fabled Gridiron Kings Football makes its resounding comeback as a standalone brand for the first time since 2003, and it will exhibit the unique artistic flair that has drawn critical acclaim in years past.

via Returning King: Panini America Planning to Bring Back Gridiron Kings Football in 2015.

Each 12-pack hobby box will deliver at least two autographs (although some boxes have three autographs), 24 Draft Picks, six Prizms, one Stained Glass and three additional inserts. We’ll have much more on 2015 Prizm Collegiate Draft Picks Football in the coming days leading up to next Wednesday’s official release. 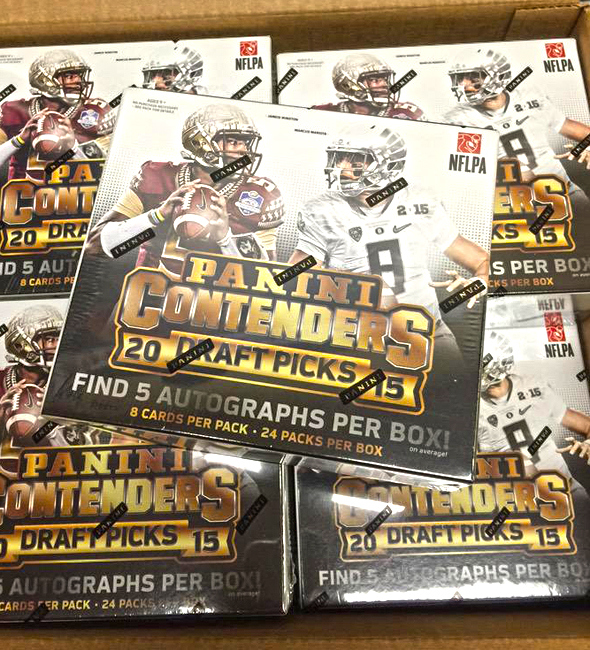 After months of buildup, Panini America is prepared to make hobby history on Wednesday with the long-awaited release of 2015 Contenders Draft Picks Football, the company’s first college-only release since signing nearly 400 universities to exclusive agreements earlier this year. As mentioned previously, the historic release is brimming with the compelling qualities that make any Contenders-branded product sing, including a loaded autograph roster, clean, colorful designs, variations, Cracked Ice parallels and so much more. 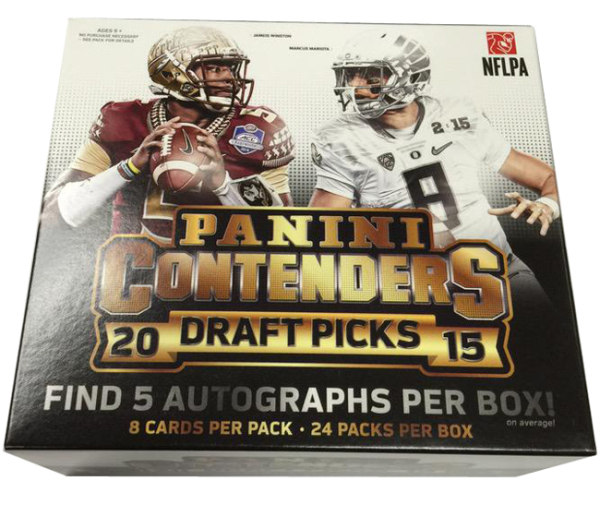 Following months of anticipation, 2015 Contenders Draft Picks Football is ready to hit the field. A packout process that began late last week has completed. Product has been overwrapped, boxed, cased and shipped. Next Wednesday, it will arrive in hobby shops across North America packing a distinctively Contenders feel (including Cracked Ice parallels and autograph variations) a wealth of impact-rich designs, great photography and a loaded autograph roster.

The Denver Broncos and San Francisco 49ers square off on Sunday Night Football with each team a half game out of first place in their respective divisions. The Broncos are seven point favorites at home, and both teams remain among the betting favorites to reach the Super Bowl. The big story Sunday is Peyton Manning’s quest to be the NFL’s all-time leader in passing touchdowns. He currently has 506 TD passes, just two behind Brett Favre. Manning has thrown for at least three touchdowns in four of the Broncos’ five games (he threw two in the other game). The closest active players to Manning are Drew Brees and Tom Brady, who both have 372 career TDs.

Football stats and records don’t hold the same mythical status that they do in baseball. Baseball fans revel in the idea of 3,000 hits and 500 home runs, at least until the steroid era. They can recite hit totals for Ty Cobb (4,191, later revised to 4,189) or Pete Rose’s all-time record of 4,256. Fans know the home run totals of Barry Bonds (763) or Hank Aaron (755). But even your most die hard NFL fans would have trouble rattling off Emmitt Smith’s career rushing record of 18.355 or Marino’s TD mark before this season when it started to get attention with Manning approaching the mark. Manning’s career has been defined by excellence and he has the opportunity to retire with the records for most of the major career passing categories. Here are some of the numbers on and off-the-field that define Manning’s career.

via Peyton Manning: By The Numbers.

It’s no secret that the NFL drives interest in the sports world, as evidenced by the coverage given to the league year-round.

Fans get college football games, the Senior Bowl, the combine, interviews and Internet coverage to get to know each and every player on the board at the draft. It’s that familiarity that makes the event so compelling.

Don’t expect the boulder to stop rolling down the hill. The draft will only get bigger, the coverage more grand and the fans more prolific.

We hope you enjoy the draft, because you will only see more of it from here on out.

The stadium will get high-speed internet, XFinity-branded in-house video, and a broadcast studio.

“SAN FRANCISCO, Aug. 11 /PRNewswire/ — At a press conference today, United Football League Commissioner Michael Huyghue announced the California franchise will be named the Redwoods and unveiled innovative team uniforms showcasing the Redwoods’ ‘Premiere’ season colors of green, blue and white. The name ‘Redwoods’ was selected after more than thirty thousand fan entries and interpretation from industry experts and an in-house creative team on what attributes the fans were seeking with their submissions. California Redwoods Owner Paul Pelosi was also in attendance at the press event.”

“Troy Smith’s evolution from running quarterback to precise passer made No. 1 Ohio State all but unstoppable this season — and helped him win The Associated Press Player of the Year honor announced Tuesday.”